The School of Inner Light offers Reiki training for all levels, from 1st Degree through to Master Teacher. This page includes some background on the history of Traditional Reiki; an outline of the training progression; and what to expect going forwards.

Reiki (pronounced ray - key) is a Japanese term that may be defined as "Universal Life-force Energy". Reiki works at subtle levels to promote healing, balance and wholeness on spiritual, mental, emotional and physical levels. It is a simple, natural, hands-on healing system in which the Universal Energy is channelled through the hands of the practitioner to the recipient. The four First Degree Reiki attunements open up the energy channels of your "subtle energy body" (including those of the chakras and auric field), arms and hands to enable Reiki (Universal) energies to flow freely into and through your body. Then, whenever you place your hands on anyone or anything with the intention to give Reiki, the energy will simply flow for as long as it is required, without ever depleting your own energies. Once the recipient has received all that they need, the energy flow is simply 'switched off'. When you give Reiki it is possible to feel the sensation of the energy flowing through you: most people feel this as heat, but it may also be felt as coolness, or as pulsing, tingling or circling sensations in the hands, arms or other areas of the body. The techniques you will learn treat the whole body in a series of hand positions, which ensures that all the major systems of the body are directly treated. When you are able to sense how the energy flows, then you will be able to judge when to move on to the next hand position of your own accord, or work more intuitively.

The background of traditional Reiki:

In its original Japanese (Usui) form Reiki is an ancient system of spiritual development and a method for healing which was rediscovered in the mid 1800s by Dr Mikao Usui after many years of study and meditation (read more at "The Recent History of Reiki" further down this page).

The Reiki system is believed by many to have originated in Atlantis or earlier, primarily as a discipline for personal and spiritual development. Originally its aim was not to study a method for healing oneself and others: instead such abilities tended to develop as a consequence of personal growth as a person's energy system developed along with their understanding of their spiritual and energetic nature. These fundamentals of personal development and spiritual growth still retain their importance in the original Japanese Usui Reiki system practised in the East today.

Before Atlantis fell much wisdom was dispersed around the world and as a consequence the Tibetan and Seichem forms of Reiki took root and developed in Tibet and Ancient Egypt respectively. Usui Reiki works primarily with Earth energy, whilst the Tibetan style used in the attunement process we teach introduces the Fire element. The Angelic Multidimensional Healing System (AMD) is based upon Shamballa Reiki, which draws its symbolism from a range of Reiki systems, including those of Tibet and Egypt. AMD works with celestial and galactic multi-dimensional energies, and is most likely to resonate with those who work or wish to work with the Higher, Galactic and/or Celestial Kingdoms of Light.

Reiki is believed to be a Buddhist offspring of Qigong, with Shinto influences. It is an ancient healing form rediscovered in the late 19th Century by Dr. Mikaomi Usui. The original Usui movement was called Usui Shiki Ryoho, and the method called Usui Reiki Ryoho (the Usui Reiki Healing method). 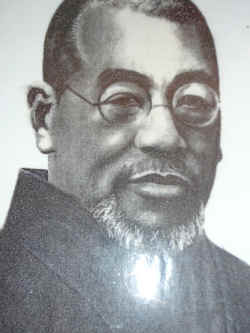 MIKAO USUI was born in 1865 and entered a Tendai Buddhist school near Mt. Kurama at the age of 4. He studied many things there, including Kiko - a Japanese version of Qigong, which is a health and healing discipline based on the development and use of Life Energy. When he was older he travelled extensively in China and Europe to further his education in medicine, philosophy, religion and fortune telling. In 1914 he went on a 21-day meditation retreat at Kurama, and it was here that he underwent his "great enlightenment" into Reiki energies. It is said that he "saw" the symbols coming towards him in waves of light, and that as they entered his crown chakra he "knew" what they were for, and how to use them. In 1922, having worked with and developed his healing system based on these energies, he moved to Tokyo, and started a healing Society. Here he gave treatments and taught classes, showing students how to work with Reiki energy. These classes were in levels and degrees - 1st degree (4 levels), 2nd Degree (2 levels) and Master degree (2 levels). For the Japanese students of the original system, each level could take years to master. In his lifetime Usui travelled widely throughout Japan, and directly taught over 2000 students and initiated 16 Masters. He died in 1926.

One of the Masters initiated was CHUJIRO HAYASHI. He continued to teach Reiki and treat patients, as did other students and Masters initiated by Usui. In fact in 1940 there were at least 40 Reiki schools throughout Japan, and training in the Usui traditional methods have continued to be passed on to native Japanese people since then by / through these Masters. In all Hayashi initiated 13 Reiki Masters before his death in 1941.

For us in the West however, things were to change. Hayashi brought Reiki to Hawaii, and thus to the USA, when he met Mrs HAWAYA TAKATA. He initiated her as a Master in 1938, and it is through her that the title "Grand Master" came about. She was declared Grand Master (although it is not known by whom) on Hayashi's death. Mrs. Takata taught Reiki to many people in the West, and had some very strict rules regarding its' teaching - high fees were charged to students wishing to learn it; students were not allowed to take notes; all teaching was purely verbal (no written copies of the symbols were allowed either) and she advocated loyalty to the same Master Teacher. It is thought these changes were to make the system more acceptable to Westerners, who were thought to value everything by cost, and to have no interest in spiritual discipline for its own sake. In all Mrs. Takata initiated 22 Masters, and passed on the title of Grand Master to her daughter PHYLLIS LEI FURUMOTO on her death in 1980.

Since then Western Reiki has split, firstly into 2 main factions (partly because some Masters disagreed with some or all of Mrs. Takata's stringent rules, especially those regarding charges), and then has developed several off-shoots, as various Masters have chosen to change or add to the original system (by experiment or by "receiving" new information from Higher sources.)

In Reiki we teach and work with mainly the Tibetan / Usui version which was developed by William Lee Rand, based on the original methods taught by Dr. Usui but with some additions that have Tibetan Buddhist sources.

Training - levels/degrees and intervals between them:

Reiki is an excellent starting point for anybody who is interested in developing their understanding of the subtle world of healing, energy and spirit by learning a hands-on healing system that can be used to aid and support personal healing and growth for themselves and (if you choose to become a Professional Practitioner) for others. In just 2 days you can be attuned to the Reiki energies and learn how to start using them safely and competently for yourself, family or friends as a Reiki 1 healer. You may then choose to advance in stages to Reiki 2 Professional Practitioner level (2 more days training); Master Practitioner level (1 more days training); and finally to Master Teacher level (2 more days training) if you are drawn to share your experience and skills by teaching and attuning others.

For those wishing to study and practise Reiki for themselves we offer a consecutive series of initiations and attunements along with lots of practical hands-on experience in a variety of forms:

Students may choose to study Reiki to any level, starting with Usui Reiki 1. It is recommended that a minimum of 3 months elapses between taking Reiki 1 and 2, and a minimum of 12 months between Reiki 2 and Master Practitioner. This is to allow sufficient time for the student to practice and feel confident in their abilities, and for the energies to integrate fully. Reiki Master Teacher may be taken any time after a minimum of 21 days has elapsed following Master Practitioner level, if the student wishes to learn to teach and attune others to Usui / Tibetan Reiki.

Usui / Tibetan Reiki 2 (this may be taken at any time after Usui Reiki 1 has been integrated, but after at least 3 months has elapsed)

Usui / Tibetan Reiki Master Practitioner (this may be taken any time after Usui Reiki 2 has been fully integrated, but after at least 12 months has elapsed)

If you choose to become a Reiki practitioner and work with members of the public, we always recommend that you join a professional organisation and obtain professional indemnity insurance: The UK Reiki Federation is a very good place to find out more if you are training in Reiki: note - this organisation (rightly in our view) will only accept you as a full member once certain conditions are satisfied, one of which is the production of your Reiki lineage, showing that your training can be traced back to Dr. Usui. Mark and I have a fairly short lineage, with only four other Masters between us and Phyllis Lei Furomoto at Master Teacher level.

Our own experience of Reiki:

Our own traditional Reiki, Seichem, Cartouche and Blue Star Mastery experiences each resulted in huge leaps forward in our spiritual growth and psychic development and have proved of invaluable help in treating family, friends and clients. It is not uncommon to have different effects arising after each level of training, which may affect the physical body, the emotions or the spiritual Self and its innate abilities.